Step Away From the News!: Keep the Creative Juices Flowing


If you realized how reading the newspaper front page to back and watching the news every day can crush your creative spirit one sound bite at a time, maybe you would step away from it and do something more pleasant...like make jewelry.


Gloom, despair, and agony on me


When I taught jewelry-making classes in the inner city, I once had a student--I'll call her Millie--who had difficulty learning even the simplest jewelry making techniques. She was a little nervous, all the time, I realized. She worried about her kids, her grandkids, her stomach her knees. Even her voice had a weary quality to it, you know, 'Gloom, despair and agony on me...."

One day I was sitting with Millie before class started, the first time outside of class where we'd had a chance to talk one-on-one. She started telling me about the murder two blocks away the night before and the one across town two days ago.


Millie knew the daily death toll in the Gulf war

And it wasn't just about the inner city. She knew what havoc the weather was wreaking in every corner of the country, not to mention how it made her joints ache. After that first conversation, I knew I was sitting face to face with a news junkie.
'So you watch the news a lot?' I asked. She did. She kept her TV tuned to either CNN or the local news channel twenty-four hours a day.

Millie watched the news at night when she was worried and couldn't sleep. It didn't take long to associate her nonstop dose of news with being too jittery to concentrate on making jewelry. It was also the news that kept her from sleeping at night. Duh!

Murder and mayhem stifle your creativity

I read somewhere years ago how news, whether in the daily paper, on the radio or on the six o'clock report, had an effect on us whether we realized it or not.

All those murders and muggings we hear about, the auto accidents on the radio, the adverse financial news, war, and hurricanes, don't just go in one ear and out the other. They stick with us.


Those news stories settle in, pushing internal buttons that keep us agitated and wanting more. But there's only so much our creative spirit can take.

A few years back, as an experiment, I excised the news from my life. One year with no radio news, no TV news at six, no 24/7 cable news. I canceled the daily newspaper too. It didn't take long to realize that I could do without that daily negative input.
It was information I didn't need. Doing without it made me a bit less informed, but it didn't prevent me from doing what I needed to do. And I was happier, less stressed and far more creative without all that self-induced terror.

You don't miss those knots in your stomach until they're gone

After my one year experiment, I tried to turn on the news again the way I used to. There was breaking news, an overturned truck spilled something all over the highway, there were a murder and a missing child.
By the time they got to the weather, I felt my stomach muscles tighten. I could feel knots forming and I realized they'd been there before but had been long gone. I could feel the very physical thing the news did to my body and I didn't like it.

Who needs all that bad news anyway?

I didn't! So I made it a permanent thing. I never renewed my newspaper subscription. To this day, I watch the news only for the time it takes to find out some specific thing, if the anchor takes too long to get to the thing I want to know, I decide it's not worth the stress; so I switch to comedy reruns on an alternative channel. (I'm certain they schedule comedy reruns opposite the news for people like me.)
Of course, the news is everywhere on Facebook, Twitter, and ...the whole internet. And don't get me started on Fake News. I haven't quite figured out how to completely avoid internet news, but I'm working on it.

In the meantime, I watch PBS and listen to NPR, both with more in-depth coverage on meaningful issues, none of the local slash and burn news. I am a happier, nicer lady because of it and my work reflects my temperament. If something happens that I really need to know, someone will call me.
One day I mentioned to Millie what I'd learned years ago about overdosing on the news, how it can scare you, stress you, cause knots in your stomach and keep you worried all the time. How it can keep you from being productive and stifle your creativity.


I told her if she tried cutting back on her news-watching for even a little while, it might calm her down. It might even help her jewelry-making skills. 'Perhaps I won't watch it so much,' she told me. Of course, she was just saying that to make me happy.

But you just can't teach some old dogs new tricks

The last time I saw Millie, she was consulting the parish nurse about a serious physical condition, ulcers or gallstones or some other such malady. When the nurse left the room, Millie asked me if I'd heard about the murder that happened up the street that morning. I said no and switched the conversation to small talk about her grandchildren. I realized she would probably be a news junkie for life.
Giving up the news was just an experiment for me, but it had such a profound effect on the way I felt, my ability to concentrate on my art, I believe in it enough to share it with you.
Shut off the television, at least cut down your intake of news and see how it affects you. Turning off the news may very well inspire you to new heights of creativity.
For more information, check out "Why we love bad news," on psychologytoday.com.
Copyright Carol George Rucker
Previously published on Yahoo Voices/Updated Sept. 2017
Labels: creativity jewelry making negative news news junkie 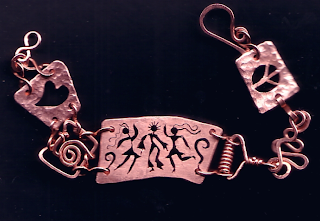